The Toyota Crown was the first Japanese car to be sold in the United States, but sales were discontinued in 1972 after 14 years.

Despite its death in America, the Crown continued to live overseas and it turned into something rather interesting as the Japanese model featured rear-wheel drive and a powerful hybrid powertrain.

The car is now making its triumphant return to America, but it’s not the Crown many people were expecting. Instead, Toyota decided to reimagine the full-size sedan for the crossover era.

With the Avalon set to bow out at the end of the year, Toyota is effectively replacing it with a crossover-inspired Crown that features a “sophisticated higher ride-height design.” This approach has been tried by a handful of automakers, but models such as the Honda Accord Crosstour and Volvo S60 Cross Country weren’t terribly successful.

It remains unclear if the Crown will suffer a similar fate, but the model features a bZ4X inspired front fascia with slender headlights and a wide intake that is largely blocked off. Continuing further back, we can see plastic body cladding, a rakish windscreen, and 19- or 21-inch wheels.

The model also has a sloping roof, a flowing shoulder line, and a discreet rear spoiler. Rounding out the highlights are a nearly full-width light bar and a streamlined rear bumper that lacks exhaust cutouts.

The design will undoubtedly prove controversial and opinions will be further split by the Platinum’s available two-tone paint job. The latter sees black paint extend from the hood to the trunk, while being contrasted by an Oxygen White, Heavy Metal, Supersonic Red, or Bronze Age body.

A Spacious And Well-Equipped Cabin 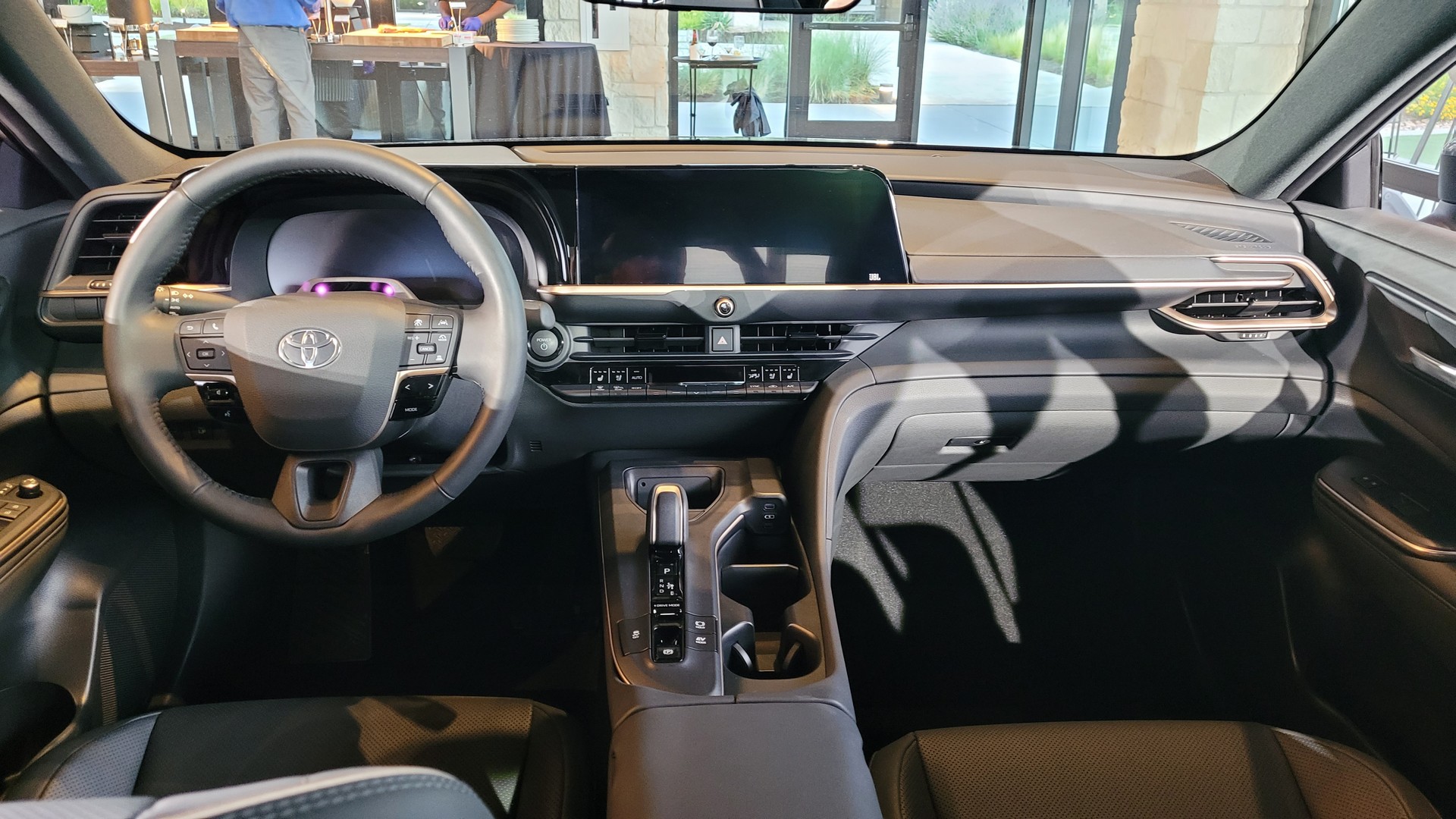 While the exterior styling will prove divisive, the interior is more appealing as it comes nicely equipped with a 12.3-inch digital instrument cluster and a 12.3-inch Toyota Audio Multimedia infotainment system.  The latter offers cloud-based navigation, over-the-air updates, and an Intelligent Assistant that responds to the “Hey, Toyota” wake word.

Given the Crown’s premium positioning, engineers focused on minimizing noise, vibration, and harshness. As part of this effort, all models come equipped with acoustic glass and extensive sound deadening. 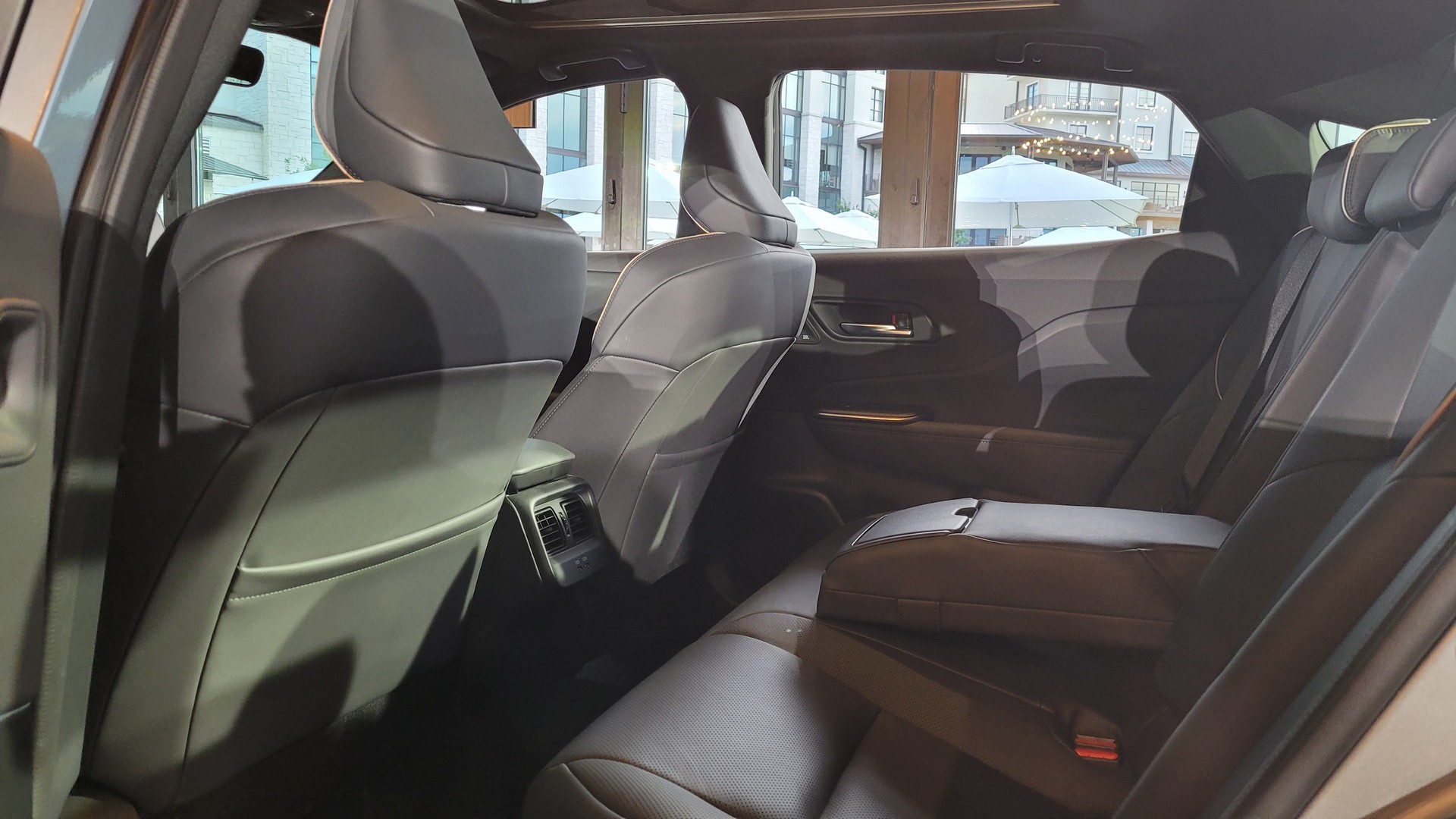 Moving up the trim ladder is the Crown Limited, which features heated and ventilated leather front seats as well as heated rear seats. Other highlights include rain-sensing wipers, a fixed panoramic glass roof, and an 11-speaker JBL premium audio system.

Sitting at the top of the range is the Platinum variant, which comes equipped with an Adaptive Variable Suspension and unique 21-inch wheels featuring black accents. They’re joined by an Advanced Park system, which allows for “hands-free parallel or reverse/forward perpendicular parking.”

Two Hybrid Powertrains With Up To 340 HP 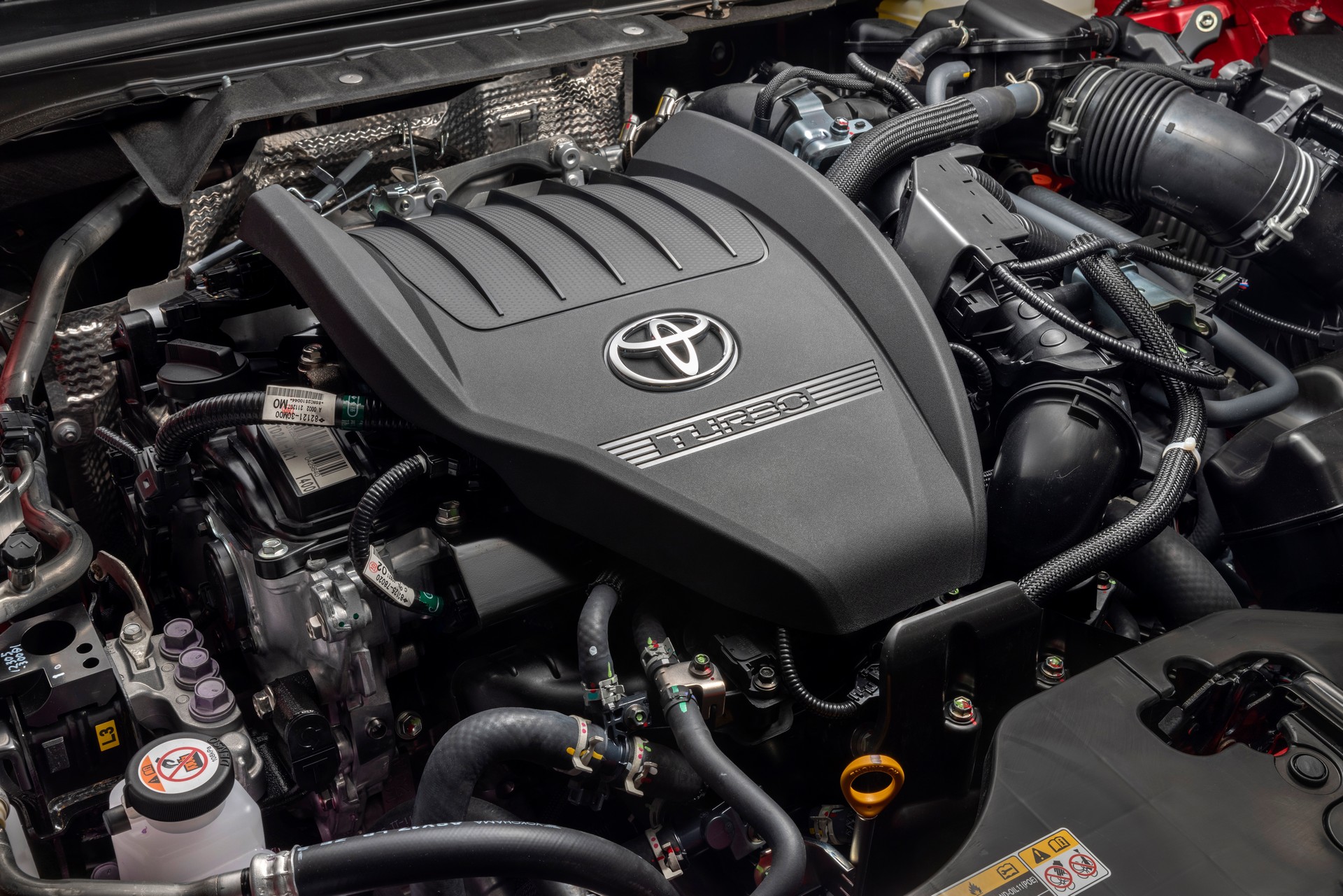 Upgrading to the Crown Platinum will reward buyers with an all-new Hybrid Max powertrain. It features a turbocharged 2.4-liter four-cylinder engine, a front electric motor that helps to maximize torque production, and a direct shift six-speed automatic transmission with a new hydraulic multi-plate wet start clutch. This setup gives the car a combined output of approximately 340 hp (254 kW / 345 PS) and an estimated fuel economy rating of 28 mpg.

All models come equipped with an electronic on-demand all-wheel drive system, which features a rear-mounted electric motor. However, the Crown Platinum has a fancier E-Four Advanced AWD system that can send up to 80% of the car’s power to the rear wheels.  Buyers will also find a “high output water-cooled electric motor” out back. 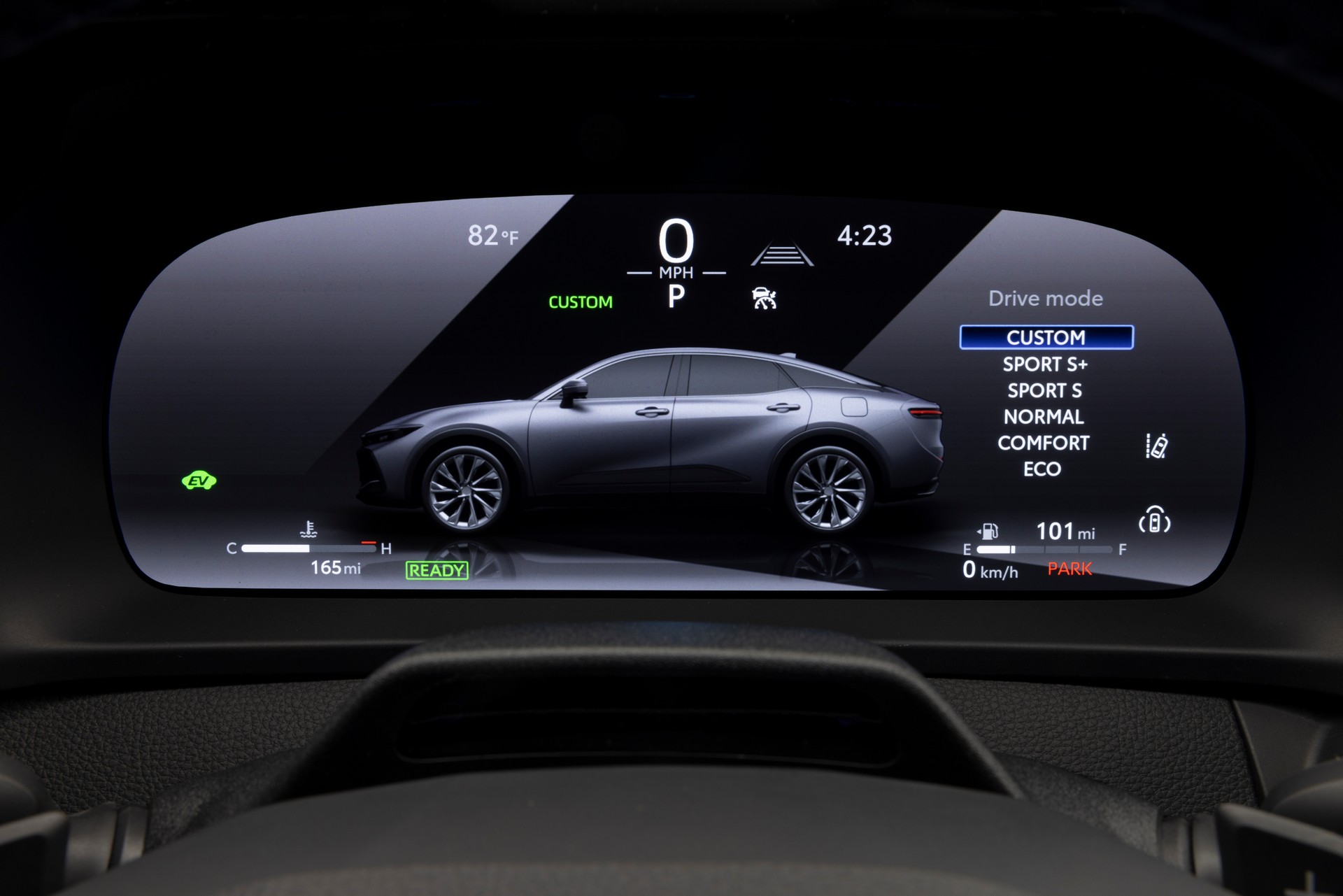 XLE and Limited variants have Eco, Normal, and Sport driving modes, while the Platinum goes a step further with Custom, Comfort, and Sport+ options. The first two are self-explanatory, but Sport+ builds on the improved throttle response of the standard Sport mode by emphasizing “steering response, flat cornering, and a sense of stability.”

The Crown rides on the TNGA-K platform, which underpins our old friend the Avalon as well as the Camry, Highlander, RAV4, and Venza. It features MacPherson struts up front as well as a newly developed multi-link rear suspension.  The latter has higher rigidity to “ensure a faster response to drive torque” as well as an optimized rear suspension arm placement to “suppress changes in the vertical posture, contributing to a flat driving feeling and enhanced texture.”

Arrives In The U.S. Later This Year 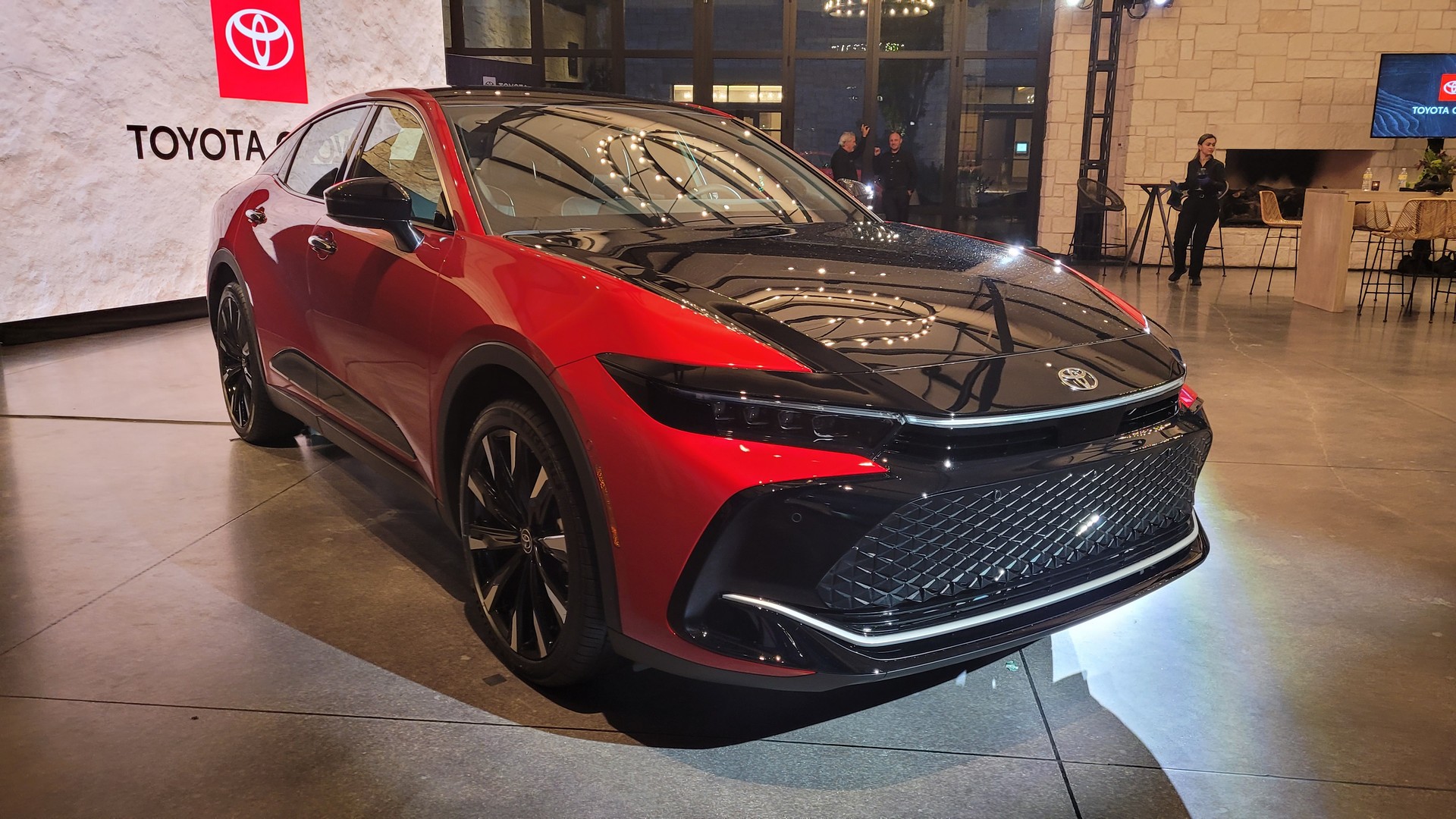 The 2023 Toyota Crown will arrive at U.S. dealers later this year and we can expect pricing to be announced closer to launch.

Wall Street rally sets up the ASX for strong open

Nicki Minaj’s “Super Freaky Girl” Rockets To #1 On All-Genre US...