Country music star John Michael Montgomery cancels show after tour bus veered off interstate and overturned in Tennessee: Singer left with ‘broken ribs and cuts’ following crash on the way to his concert

By Alastair Talbot For Dailymail.Com

John Michael Montgomery was left injured with ‘broken ribs and cuts’ after his tour bus veered off road near Jellico, Tennessee, while on his way to his next concert in North Carolina.

The 57-year-old country singer behind 1990s hits ‘I Love the Way You Love Me and ‘Sold’ notified fans about the ‘serious’ crash on his Facebook page on Saturday.

He missed his show on Friday following the crash, and has cancelled another show in New Braunfels, Texas, that was initially scheduled for September 17.

The artist’s official website suggest that Montgomery’s return to stage will be on September 24 in Shipshewana, Indiana.

William Salyer of Staffordsville, Kentucky, and Marc Wood of Frankfort, Kentucky, were also injured during the road accident.

‘Despite some cuts and broken ribs, I am doing well. I will take some time over the next couple of weeks to heal and be back on the road soon,’ Montgomery shared on social media.

‘I am grateful to the medics and highway patrol for their quick response to this difficult situation. Thanks to everyone for their concerns.’

The 57-year-old came out of the incident with several ‘broken ribs’ and ‘cuts’. He is currently recovering and will miss a concert in New Braunfels, Texas, initially set on September 17 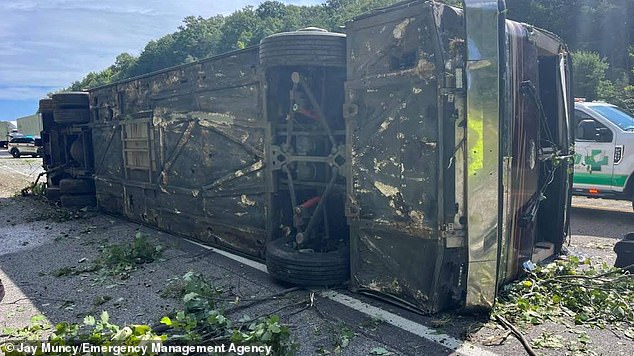 The tour bus of country singer John Michael Montgomery flipped to its side after it crashed onto an embarkment on I-75 near Jellico, Tennessee, while the artist was on his way to North Carolina for his next concert 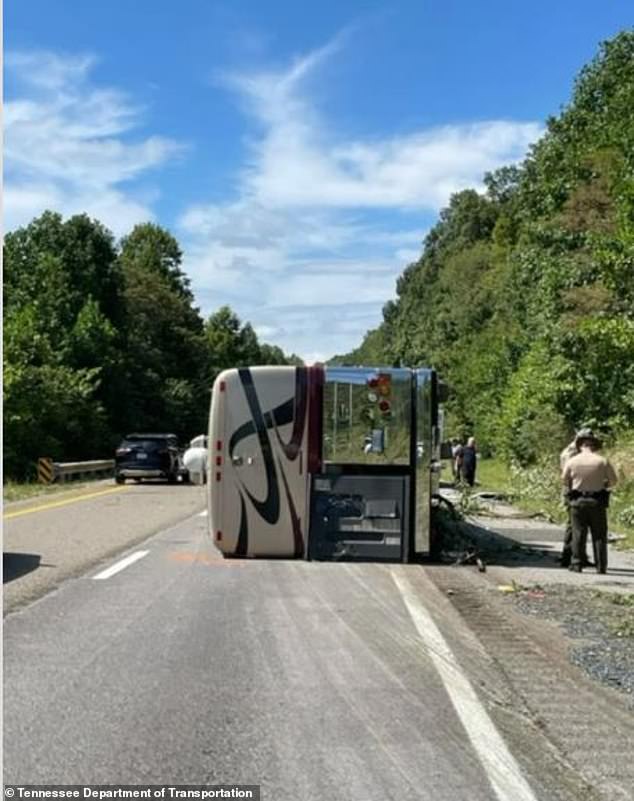 Tennessee Highway Patrol, which the vocalist praised for its ‘quick response,’ said in a report that Montgomery’s 2001 Prevost Featherlite bus was on heading south of I-75 when it swerved off-road.

The trailer then overturned after hitting an embankment near the Kentucky border. At the time, only Salyer was wearing a seatbelt, according to USA Today.

Montgomery’s tour bus seems to have come out of the accident heavily wrecked, as the vehicle’s front windows appear to be shattered.

The coach’s interior also looks as if it had flipped, while the trailer’s exterior seems to have been damaged by trees and branches.

Montgomery, who is from Danville, Kentucky, recently appeared in Kentucky’s State Fairgrounds’ Texas’ Roadhouse Concert Series last month along with his son, Walker, and Noah Thompson – the winner of American Idol Season 20 in May.

The group is still active despite the death of Troy Gentry – the other member of the band – who died in a helicopter crash in 2017.

Montgomery has more than 30 singles on Billboard country charts, of which seven have reached number one, including ‘I Swear’, ‘Be My Baby Tonight’, ‘If You’ve Got Love’.

Several of the vocalist’s singles have featured in the Billboard Hot 100 with ‘Letters from Home in 2004’ being ranked the highest at No. 24. 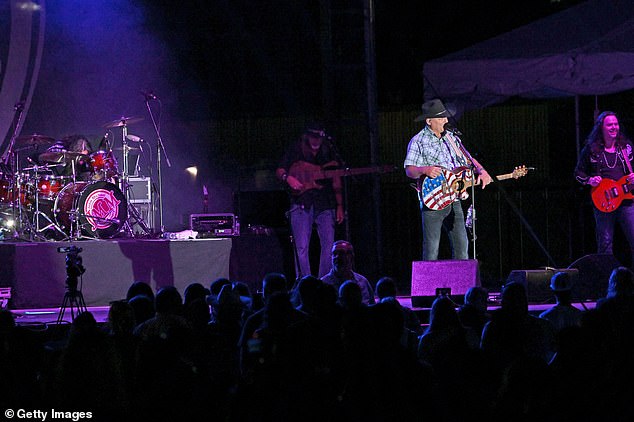 Montgomery has more than 30 singles on Billboard country charts and his song ‘Letters from Home’ was ranked at No. 24 on Billboard’s Hot 100 in 2004. Pictured: Montgomery performing during the Kentucky State Fair at Kentucky Exposition Center on August 24, 2022

Who are the Dryes? Meet the married duo who performed an iconic duet and joined Team Blake

Sterling collapses as investors fly into US dollars