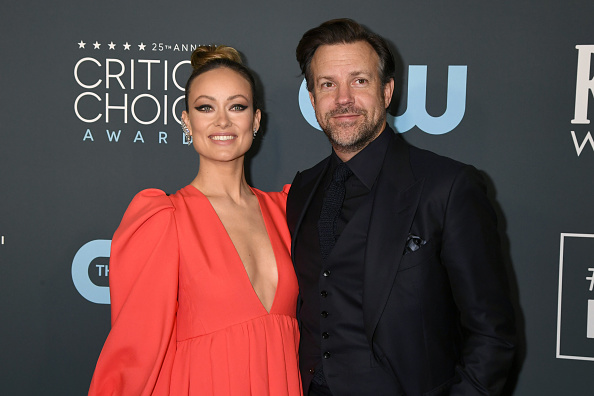 I don’t know if any of the rumors are true that Florence Pugh is not promoting Don’t Worry Darling because of hard feelings toward Olivia Wilde. It makes a certain amount of sense. Florence Pugh is dating Zach Braff who is best friends with Bill Lawrence, the co-creator of Ted Lasso (an episode of which Braff directed). Maybe Pugh had warm feelings for Sudeikis, and maybe it upset her to see Sudeikis visit the set of Don’t Worry Darling with their kids knowing that Wilde was allegedly fooling around with Harry Styles behind his back.

It also wasn’t a good look for Olivia Wilde to be served custody papers during a Cinemacon event where Wilde was promoting Don’t Worry Darling. Did Sudeikis know she’d be served those custody papers in such a public, humiliating way? He says he didn’t. But I also know that — celebrity or not — custody disputes bring out the worst in people.

I remain agnostic. I love Ted Lasso, but I also think Don’t Worry Darling looks great, and Wilde’s Booksmart is one of my favorite comedies in recent memory.

However, Olivia Wilde certainly believes that Sudeikis intentionally tried to humiliate her by serving custody papers on stage, as she suggests in her latest court filing, via Us Magazine:

The Lazarus Effect actress, however, argued the “outrageous legal tactics” felt calculated. “Jason’s actions were clearly intended to threaten me and catch me off guard. He could have served me discreetly, but instead he chose to serve me in the most aggressive manner possible,” she claimed in her filing. “The fact that Jason would embarrass me professionally and put our personal conflict on public display in this manner is extremely contrary to our children’s best interests. Since Jason has made it clear that we will not be able to work this out for our children’s sake outside of the court system, I filed a petition for custody in Los Angeles.”

In response, Sudeikis admitted again that he didn’t intend for Wilde to be served publicly, adding that neither did he want to serve her at the children’s school or in the home of Harry Styles.

The custody dispute centers on where the kids are meant to live permanently. Sudeikis wants to move back to New York, while Wilde wants to continue living in Los Angeles until next year when she plans to permanently relocate to London. The papers that Sudeikis served to Wilde were a request to relocate the children to New York while he is not working. Wilde did not like that arrangement, which prompted her to file the above petition for custody in Los Angeles.

Dustin is the founder and co-owner of Pajiba. You may email him here, follow him on Twitter, or listen to his weekly TV podcast, Podjiba.

←
The Best Damn Live Music Clip Of All Time: Iron Maiden Soaring With ‘The Talisman’ Live in 2011 |

Actress Who Delivered Brando Oscar Speech Was 75 – The Hollywood Reporter

Marvel Changing Armor Wars to Movie Instead of Disney+ Show

‘Hocus Pocus 2’ Is Double The Toil And Not Worth Your...