Jenna Dewan struggled without Channing Tatum after they welcomed their daughter into their lives.

The former couple, who share their child Everly, aged eight, were not able to be together soon after their daughter was born because of the actor’s work commitments.

The 40-year-old spoke about her experience on the Dear Gabby podcast, where she noted that it was ‘really hard’ without him being by her side in her early days of parenthood.

Being honest: Jenna Dewan recently admitted that it was ‘really hard’ not having Channing Tatum near her after they welcomed their daughter Everly into their lives

She said: ‘I had to travel with her and at the time, Chan wasn’t available to be with us for the most part. So, it was me, my doula and Evie all by ourselves traveling at six weeks.’

Dewan did point out that, although she kept Everly close to her while she was working, her stress levels did not improve.

‘That was really hard because that was long hours. I did have her on set with me constantly…It was just really difficult,’ she said.

The Soundtrack actress also admitted she also had to cope with emotional issues following the birth of her daughter at the time. 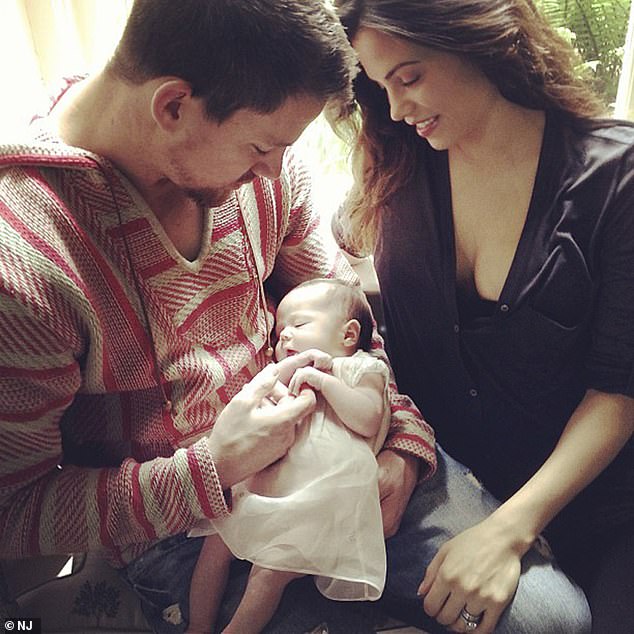 Doing his thing: The actress noted that, due to his professional committments, her ex-husband ‘wasn’t available to be with us for the most part’ in the months following Everly’s birth 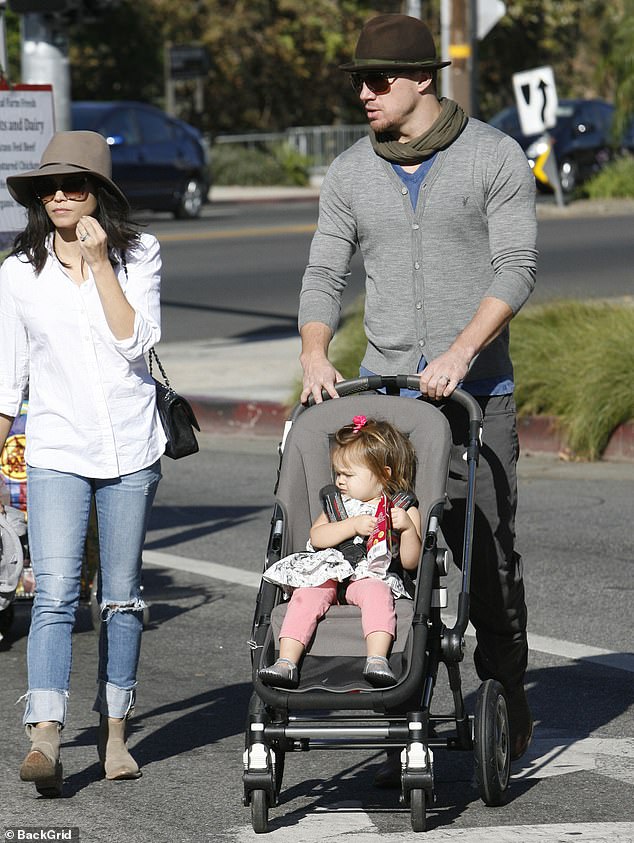 Staying close: The performer did reveal that she often brought her daughter to work with her when her former spouse was not available; the former family is seen in 2014

She added: ‘And I had a lot of postpartum anxiety I would say. It was like, I just never stopped.’

The former Witches Of East End cast member also expressed that she was constantly trying to find a balance between her new role as a mother and her professional commitments.

‘You know, you’re up a couple times in the night and then you’re working all day. I was breastfeeding, I was pumping, I was without a partner, I mean it was just craziness,’ she recalled.

Dewan and Tatum, 41, were first romantically linked after they costarred in the 2006 romantic dance film Step Up. 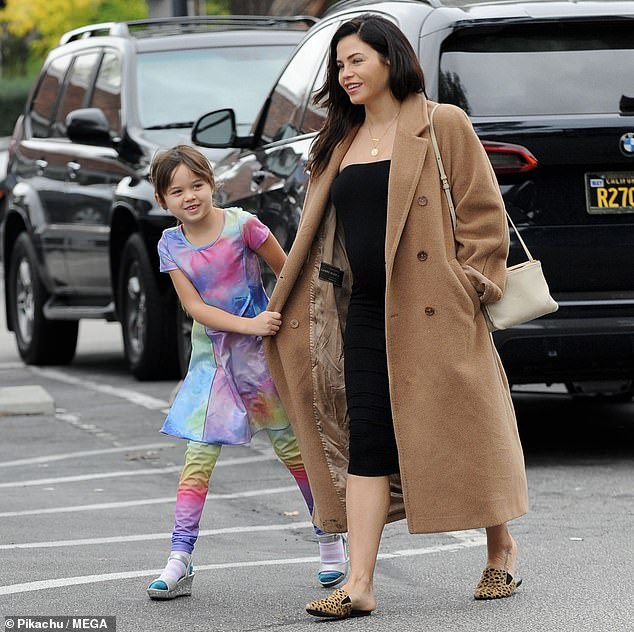 Working mom: Dewan noted that she took care of her daughter at night before going to work in the day, which she described as ‘craziness’; she is seen with Everly in 2019

The two went on to begin a relationship following the movie’s release and eventually tied the knot during a wedding ceremony that was held in 2009.

After nearly four years of marriage, the former couple welcomed Everly into their lives.

However, the two announced that they had separated in 2018, and they went on to finalize their divorce the following year. 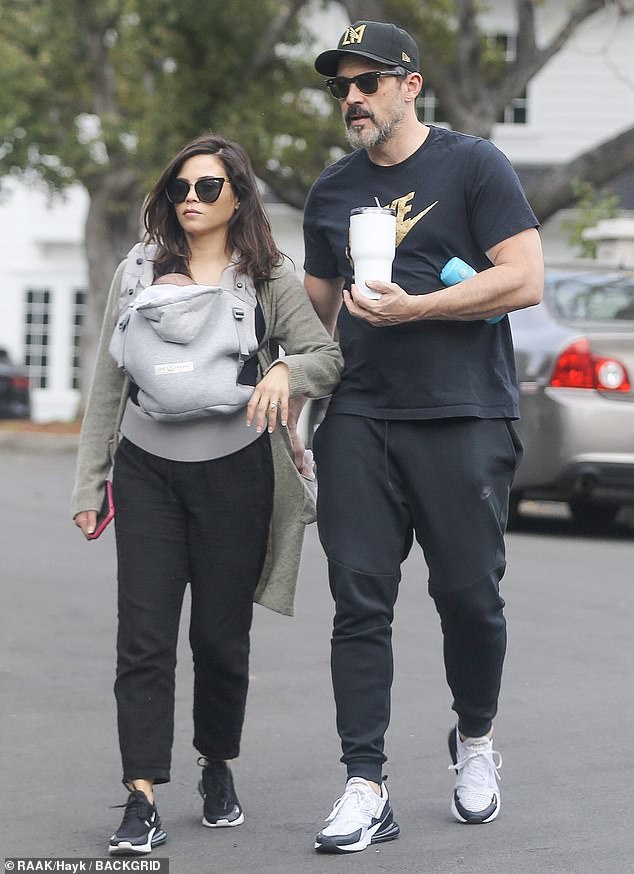 Moving on: Dewan began a relationship with actor Steve Kazee the year that she and her former spouse separated; the two are seen with their son Callum in 2020

She later began a relationship with actor Steve Kazee the year that she and Tatum initially split up.

Dewan also expressed that she felt ‘grounded’ when she welcomed her 16-month-old son Callum, whom she shares with her 45-year-old fiance, and she enjoyed being at home in a little ‘love nest’.

The performer shared: ‘This time around, I was so grounded. Even though the world was crazy, I was home and in this love nest and it was different.’ 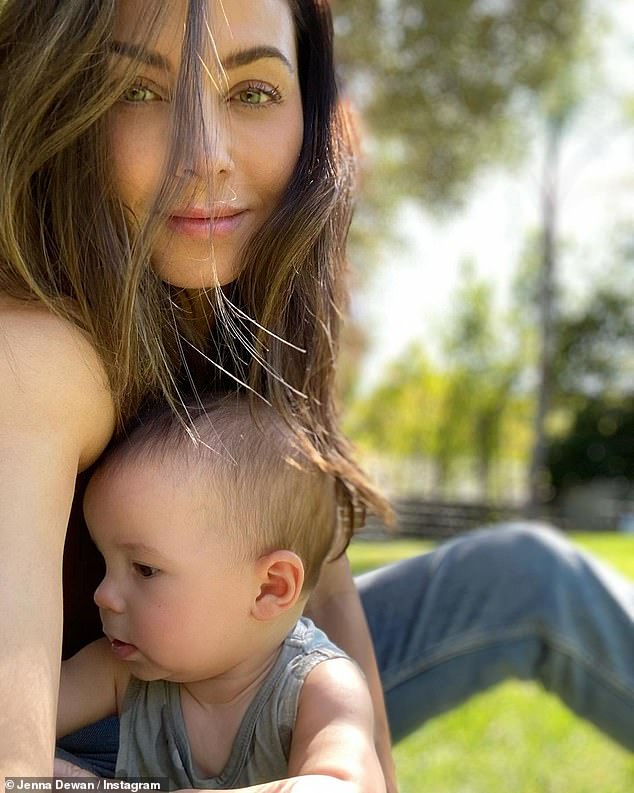 Happy mom: The performer added that she was happy to be spending time with her new son and fiance in their ‘love nest’

On Monday afternoon, Dewan shared a duo of snaps featuring both of her children to her Twitter account.

The actress was seen holding her kids while they spent time in a pool together, and Everly was seen yelling while making a big splash.

She also wrote a brief message in the post’s caption that read: ‘Any parent knows this is a baby miracle right here…All looking all smiling!’ 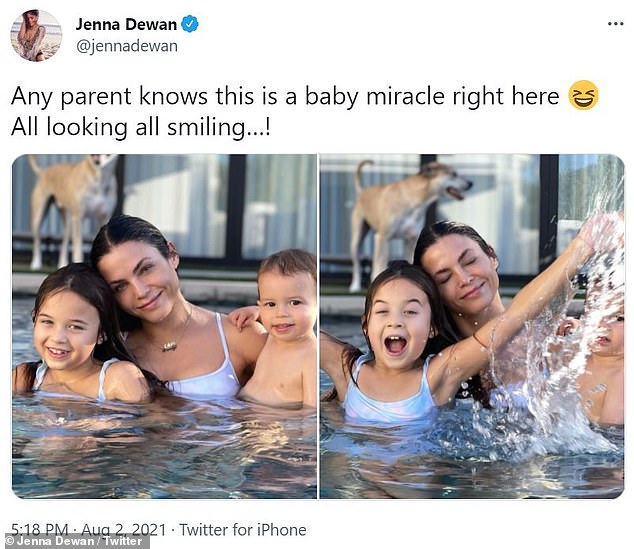 Fun in the sun: On Monday, Dewan shared a duo of shots showing her spending time with her kids in a pool to her Twitter account

‘I Was Afraid of Being Homeless Again’

Will Steve Martin retire after Hulu’s ‘Only Murders in the Building?’

Kody Brown Screams About All His ‘Sacrifices’ in Season 17 ‘Sister...

Thieves steal at least 20 whole briskets worth thousands of dollars...